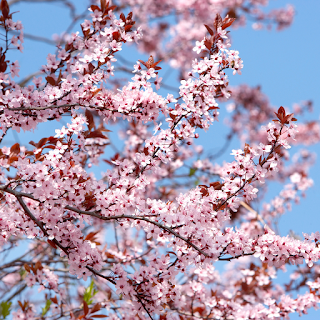 Because after primary school no one
gets participation ribbons, cherry trees
drop petals like prizes across the yard.
I am famous for counting stars, catching
grasshoppers, anxiety. Give everyone
a medal for surviving heartache, divorce,
therapists. A gravestone is a trophy you win
after death. Truth deserves its own points
program. I’m saving up for sea monkeys,
X-ray vision, immortality. I won the contest
at my place of employment for blood
circulation, work despondancy, art
emergencies. Every year, I know less than
the year before, but still the rewards
keep piling up like medical prescriptions,
credit card debt. The evidence dictates
each day is a prototype for Heaven or Hell.
Make your choice wisely. I accept this honour
on behalf of leaving nothing out: vitamins,
lower back pain, river walks. My speech
will not make the headlines. The cherry trees
rain down coloured applause. 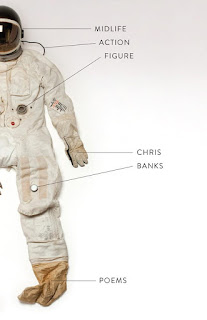 Well, my next book Midlife Action Figure is coming out with ECW Press in just over two months, and I couldn't be more excited!

It is always a pleasure to work with my editor Michael Holmes and I think we have come up with something very special with this new collection which I'm calling a book of light surrealism and aphoristic wisdom.

Instead of going with pull quotes from several newspaper reviews of my last book The Cloud Versus Grand Unification Theory, I elected to ask my American poet friend Bob Hicok and Canadian poetic comrade Catherine Owen to blurb the collection ahead of publication. Here is what they have to say about the book:

"My spirit guide is a scarecrow; guilt is everyone’s personal gulag; can I coat-check this malaise; death is classically trained: Chris Banks builds poems out of short sentences that are like photons, little packets of energy full of aphoristic punch and surprise. He delights in the swings of imagination, in the way every next image or idea can plow new ground even as it alters the meaning and feel of what has preceded it. The result is a constant state of euphoria, an ongoing demonstration of the swerve and swirl of human consciousness. A river is a correspondence course -- as with so many lines here, my recognition that I’ve never thought of it that way is followed immediately by the sensation that there’s no other way to see it, that I am being shown the truth."
- Bob Hicok

"The laboratory of aesthetics / these days is really about mischief / and surprise, writes Chris Banks in this collection of cheeky, pointed dicta on everything from how to survive an emergency to enduring a job interview, amid surreal admissions that the speaker has a "minor crush on Saturn's moons" or possibly suffers a "slow leak" as each year his "heart grows an extra ring." Midlife Action Figure is a book of solid poems from the centre of existing, through deep space and the places in the mind like "Matryoshka dolls" that endlessly nest into their own allusiveness, returning with a yield of essential observations and imperatives for the continuance of the earth."   - Catherine Owen
Posted by Chris Banks at 12:47 PM No comments: