The Transgressive and the Fantastical: Elizabeth Bachinsky and Sara Peters 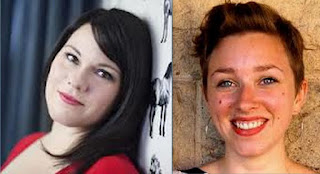 Elizabeth Bachinsky's The Hottest Summer in Recorded History, by Nightwood Editions, and Sara Peters’ 1996, by House of Anansi Press, ask more from their respective audiences than casual reading. These books demand participation from readers. If you are looking for poems bound together with easy observations, or a familiar jog through a personal lyric, you will come away disappointed. Both Canadian poets attempt to do quite the opposite: to undomesticate the world, to set things on fire with their minds, to rattle the cages of readers and by doing so, to reinvigorate the imagination.

Bachinsky’s book begins with the lines “I can see now that I once was quite feral. / Getting older was my education in becoming civilized” from the poem “You Know What Readers Like”. This is an apt description for how a reader feels when reading her poems for although the point of view is decidedly personal, the “voice” in her poems displays a powerful self-awareness suspicious of where it finds itself. Bachinsky’s book is rife with images of urban sprawl and superficiality—googling blondes, Telly Savalas, Nails salons, Venice Beach—all of which are treated by the poet as memento moris of a western civilization in decline. A popular culture that has become a plastic church.

This cocktail of high and low culture might be dismissed by others as mere ‘cool-hunting’, Bachinsky angling for a kind of bohemian sophistication, except for the fact that the wilderness intrudes in many of the poems. There is a picture postcard-worthy lake that is actually only three feet deep and choked with ragweed. A mountain rises in the distance above a passing train full of commuters. The speaker in another poem rides her thorough-bred horse through an empty subdivision where there are “no trees, just a razed cow field / where developers built and we moved in.” This poem ends with the lines, “my big dark horse, waiting / for me to come on back / outside” which implies nature on the ragged fringes, living outside society’s frame, is a place of spiritual renewal.

Take, for example, her poem “The Spider’s Alphabet” which appears in its entirety below:

Once in rural Japan my good friend Allan joined a fascinated throng
in watching a white spider meander across a market square,

mid-May—then it moseyed. And when I first moved from the city
to the woods outside Vancouver, I evicted two from my laundry

room, an old married couple, bodies each a good inch long, grey-brown.
They were pissed. They lived without a web. They were hunters’

the whole length of their basement window replete with corpses:
fat blackflies, millipedes. A real nice set-up. I screamed!

But all summer in the press room, I have watched a thin brown thing spin
webs behind the type cases. And I have thought of E.B. White,

his Charlotte, and what I would do with my Charlotte after she,
feeling safe, spun her pale yellow sac near the small window

that opens onto your derelict English garden. I watched the sac hatch
and for weeks afterwards I found spiderlings among the liagatures.

We worked together. Me, dissing type while the little ones wove
through the alphabet. Now—the wolves who stalk through

my house at night?—they keep my tabby entertained.
In the day, I leave my windows open, and my doors. Yet how

pest-free my house remains! Some nights I dream of eight eyes and wake
to unexpected cash. Strange. This fall when I move back to

the city with its silverfish and exorbitant rent, I think I will summon
spiders. It is best to live with them. To let them into the house.

There is so much to love in this poem — the white spider and the fascinated Japanese throng, the move between the city and the woods, the allusion to E.B. White’s Charlotte's Web — all of which implies a connection to nature is important because it resets or awakens the imagination. This is certainly how I take the meaning of the last lines where the speaker says, “Strange. This fall when I move back to / the city with its silver fish and exorbitant rent, I think I will summon / spiders. It is best to live with them. To let them into the house.”

What Bachinsky places squarely in her cross-hairs in The Hottest Summer in Recorded History is not only urban-planning run amok but the gentrification of consciousness. Just when readers find themselves getting too comfortable in a poem, out come the bull-whips and the tiny wooden armadillos, the hobbled horses and the jimmied keyholes, the plastic paparazzi playsets and the zombie finger puppets.

Elizabeth Bachinsky uses her bursting lyricism and wide-ranging eye to seek the borders between the feral, i.e. the wild, and a recycled culture so obsessed with its own past it is unable to create any new meaning.

Sara Peters also wants to make her readers uncomfortable in her new book 1996, but she does this more directly, employing an overtly surrealist approach. ”As a teenager, there are several ways to get your parents’ attention. / Only one of these ways is to set things on fire with your mind.” So begins Sara Peters’ poem “Mary Ellen Spook” and it quickly sets her readers on pins and needles for her poems work against easy observation.

Like Bachinsky, Peters creates tension between things familiar and fabulous, leaving her readers feeling unfixed and detached. There is a dream-like quality to many of her poems. In “Bionic”, a twenty-two year old brother believes he is bionic and is looking after a senile mother whom he dresses in a t-shirt that reads, “I kill everything I fuck // I fuck everything I kill.” In “Your Life as Lucy Maud Montgomery”, a menacing Ann of Green Gables makes an appearance carrying a butterfly knife. In “Camden 14”, a boy sets himself on fire in the middle of a neighborhood.

Reading her poem “Cryptid” below, it becomes clear how Peters employs surreal imagery to create a dream-like atmosphere, both transgressive and distorted, in order to shake up her readers.

You saw her once, at Margaree Harbour,
when you were a three-year-old boy called Oscar.

While you staggered over the sand,
slippery with SPF 50,

your parents humped on the beach towel,
to Lou Reed singing “Sweet Jane.”

Lipless, lidless, five slits in her throat,
her rosy larynx furled in and out.

You laughed at her boa: seaweed, rusted forks.
She tore up a starfish, swallowed its points.

You offered, as truce, some Sun-Maid raisins.
She spread out, to amuse you, all forty fingers.

Finding you gone, your father sprinted over the sand
(long-legged, in one Birkenstock)

While your mother stayed right there!, sat on her heels,
gasping into a brown paper bag.

Later, your parents noticed the salt taste of your skin,
called you their potato chip.

Your mother combed sand from your hair,
your father found beach grass in your bed.

Now they sleep to the sound of rogue waves crashing. Dreaming,
they pick their way through dying jellyfish

to find you waiting (not for them) behind a rock,
content amid the iridescent quivering.

Immediately, readers are swept into this dream-like scene with the use of the second-person pronoun transforming them into a three year old boy named Oscar. The parents dry-humping on a beach towel, the eerie lilting guitar and dead-pan bluesy voice of Lou Reed singing “Sweet Jane”, the sea-creature with her boa of seaweed and rusted forks, all of these images evoke the poem’s chimerical fantasy, which reminds me here a little of a poem by Larry Levis “Inventing the Toucan”.

It is as if Peters, distrustful of mimicry or imitation of any kind, fears her images will fade into a poem’s background, becoming mere wallpaper, so awakens or ignites her audience’s attention by allowing her poems to participate in the fantastical and the surreal.

Sara Peters’ large-minded speculative vision is not interested in a carbon copy world of appearances, but in the “throbbing interior” of her imagination.

Stanley Plumly has said, “Resemblances are our masks for meaning” but both Bachinsky and Peters never let their readers get too comfortable with such masks. Please pick up Elizabeth Bachinsky’s The Hottest Summer in Recorded History, published by Nightwood Editions, and Sara Peters’ 1996, published by House of Anansi Press, at your local bookstore.
Posted by Chris Banks at 9:34 AM 1 comment: