There Is A Light That Never Goes Out 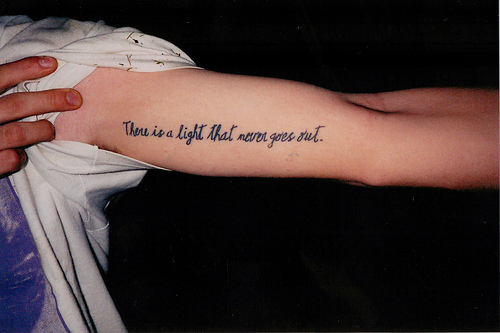 There Is A Light That Never Goes Out

but it rings less true than it did once upon a time.

The older we get, the more we turn to silhouettes,

so when I hear the chorus, I feel only at a distance

from the tell-tale guitar of Johnny Marr or Morrisey’s cries.

His voice singing, there is a light that never goes out,

A requiem to teenage years that never quite existed

except in old music videos, or the pages of Rolling Stone.

No, the older we get, the more we turn to silhouettes

where our memories, mere shadows of sense, emerge

or like a sweeping beam of light that never goes out

cutting through a fogbank warning ships off rocks,

the shoreline obscured, invisible, too far away to imagine.

No, the older we get the more we turn to silhouettes.

Our leather jackets with band patches and buttons

hang in the closet or attic. We raise our children

saying our love is a light that never goes out,

While slowly they watch us turn to silhouettes.

My Story in a Late Style of Fire 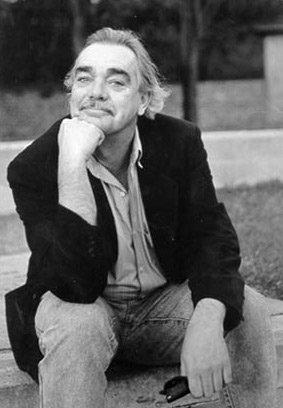 There is a new fund-raising venture for a documentary film about the work and the life of American poet Larry Levis. I stumbled across a trailer for the proposed film last year and became tremendously excited, posting a link to it on my blog, but it seems now the director Michele Poulos needs help to fund the remainder of the project.
Making a documentary costs money and Poulos has been funding the film out of her own pocket. She has since created a kickstarter page so fans of Larry can make donations without hassle. The poetry of Larry Levis has been very important to me these last several years and so making a donation was an easy decision. If you are a fan of Larry Levis's poetry as I am, I hope you will consider making a donation to such a worthy project!
(Thanks to Rob Taylor for keeping me abreast of these new developments)
Posted by Chris Banks at 12:37 PM No comments:

John Keats remarked in a letter to his friend Haydon that “Difficulties nerve the Spirit of Man – they make our Prime Objects a Refuge as well as a Passion.” No stranger to suffering himself after attending to his mother before she died, and then watching his brother Tom waste away from a disease which would later claim the poet himself, what Keats meant by this statement is that suffering does not simply make one’s poetry a salve or a balm. Suffering also elevates perception, intensifies life experiences, so a poet may come to greater self-knowledge and a new understanding of the human condition.

This idea is threaded through much of Keats’ work but it is also found in Mark Callanan’s new collection of poems Gift Horse published by Signal Editions. As hinted at by the title, however, Callanan’s brush with death in the form of a medical emergency a few years ago has made him less inclined to talk about it in terms of anything except as a gift. There is a real humility to his poems, which reaffirm life’s uncertainties rather than bolstering the grandiose claims Keats made for poetry as a physic for all the hurts of the world.

This is not to say Callanan’s poems are not ambitious, but rather his ambition is found in the workmanship of his craft which undertakes a serious examination of the physical world, a world he unwittingly almost lost, rather than in some prophet or philosopher’s private musings of an ethereal paradise.

Take for instance, his poem“Meningitus” from the first section of his book where the speaker’s hard-earned wisdom is that life is far more fragile than he realized:

I wait here for the sky to quaff the harbour sludge,

the hills to slough off houses, light poles,

cars parked neatly at the curb, the sun to burn

away the trappings of the city with its bulbs

of suburbs, the sea to rise and gorge itself

punts whose gunwales melt into the earth.

Instead, I find myself compelled toward the dirt,

a writhing fit on the bedroom floor.

I kick my hooves and stare

past the faces of my family,

toward the future, that uncertainty.

Unlike the first stanza with its apocalyptic imagery where the poet sits waiting for some revelation, for some vast image out of spiritus mundi to trouble his sight, the second stanza begins with a glimpse of his own near death. This revelation is very different from the one he anticipated. More akin to animals than to the divine, it is his mortality he learns which connects him to all existing things in nature, rather than some imagined metaphysical realm.

This pragmatism enters into another poem “The Meaning of Life” which wanders further into this territory:

The Meaning of Life

It could be that this line drawn taut

between my fist and Bonnie’s kite—

the nylon wings and plastic strut—

is closer than I’ll come to revelation.

Or trust, I mean, in the sort of heaven

a feather’s width between the fingertips

of god and Adam insinuates,

their faith enduring on a chapel ceiling.

I’m the kind of man whose mind

is often flocked with herring gulls

that dive for chicken skins in parking lots.

And yet, at times, I almost grasp

what’s lost down on this lower plane:

the pull of unseen hands, a gentle tug.

Tangled string; me staring up.

Unlike others whose near death experiences have lead to a fervent belief in god, the speaker’s faith resides only in a world he can feel and see in some way, where his mind “is often flocked with herring gulls / that dive for chicken skins in parking lots”. Instead of belief, this poem insists the only connection to what lies beyond this life is the speaker’s own uncertainty anything else exists. Even so, the last four lines admit that powerlessness in the face of mortality has the speaker, at times, staring up and looking for a god to make sense of it all.

Ultimately, Mark Callanan’s collection Gift Horse is concerned with a whole array of things – mermaids, snowmen, extinct wolves – but the terrifying fact of one’s mortality underscores the whole collection. Lucia Perillo talks about powerlessness in the face of death in “Job versus Prometheus” from her essay collection I’ve Heard The Vultures Singing where she concludes:

The worst thing about disease is how it undoes Prometheus’s good deed and gives the patient a flash glimpse at his or her possible death—a flash that’s never exactly accurate, of course, because we all ride the plotlines of our singular, inevitable physical demise. Disease is notoriously inconsistent. And yet the flash is still horrifying, frightening beyond belief, because it might contain some truth after all. (54)

If you have enjoyed these poems by Mark Callanan, please go buy a copy of Gift Horse from your local bookstore and discover his poems for yourself.

Posted by Chris Banks at 8:17 PM No comments: