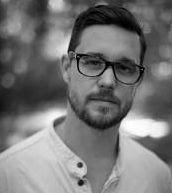 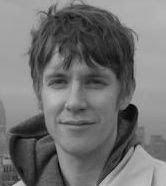 What people like to call poetic attention for me is the great leap forward of imagination captured in language. This is something hard for young struggling poets to comprehend and which I believe cannot be taught. However, it can be learned through daily practice and a little faith.

Matt Rader and Nick Thran are terrific Canadian poets who already in a very short span of years have grasped the intangibles of poetic attention. Their most recent books, Rader’s A Doctor Pedalled Her Bicycle Over The River Arno and Thran’s Earworm, have not left my bedside table since they were published last Spring for each one demands re-reading.

Both Rader and Thran pay close attention to their subject matter often making the speakers of their poems commentators or witnesses who wish to remain somehow in the background. However, paradoxically, their speakers are also the makers or inventors of the poems, fabulists who mine elegy and experience, anaphora and sweeping associations to quilt a vision of a conditional, patch-work world, one underlaid with a fundamental awareness that any glimpsed pattern or created order is momentary.

These poems are memorials not only to a world that is constantly in flux – people and things coming in and out of existence – but memorials to the very flow of human thoughts, which are also fleeting. A typical example is Matt Rader’s poem “Music” which is the opening poem from his new book:

I awoke on Veteran’s Day in the United States
To blue skies and a republican Cali sunshine
That made the whole town of McKinleyville
Appear lit from the inside, as if it were its own
Source of light, as if it still heard the sad music
Of its first name, Minor, and heard the minor
Third Mckinley sang when he was shot through
The stomach and the pancreas and the kidney
At the Temple of Music in Buffalo, New York
In nineteen hundred and one. We were talking
Poetry, my friend and me, and what happened
To the lake in Blue Lake after the Mad River
Was leveed and how McKinley was the last
Veteran of the Civil War elected President,
How he died of gangrene because the surgeons
Had been forced to operate by reflected sun-
Light and could not find the bullet. We talked
As we drove the back roads of Humbolt County
About our faith in the persistent wellspring
Of meaning and sang along with Springsteen,
Headed north to the tall trees at Prarie Creek,
Past the beachhead at Trinidad and the casino
And the Orick gas bar, past the present moment
Into our late afternoon beer at the Fieldbrook
General Store where we sat in the dimness
And recalled things that happened long before
Us like the redwood forest and the salt marsh
In Humbolt Bay, like the Pan-American Expo
Where the first x-ray machine was on display
And President Mckinley reached out to shake
The hand of a man carrying a pistol concealed
By a hankerchief. “All my people are larger
Bodies than mine,” my friend quoted Agee,
“By some chance, here they are, all on this earth.”
These are the facts as I know them. Mckinley
Died from a lack of light and the assassin
Was executed by electricity on State Street
In Auburn, New York, on the traditional land
Of the Iroquois Confederacy, two weeks before
A wrecking crew razed the Temple of Music.

Matt Rader memorializes many things in this poem: the assassination of the 25th president of the United States, the leveeing of the Mad River, the birth of a redwood forest; the dissolution of the Iroquois Confederacy; the razing of the Temple of Music in Buffalo, New York and even a late afternoon drive with a friend discussing the persistence of meaning in the face of collective losses that can never be rightly tallied.

It is a kind of eulogy to human experience, but it is no Vale of Tears either, for the thread which holds all these items together is the speaker’s capacity to create meaning; in fact, to insist upon it, even when most often the blunt instruments of words and an indifferent world resist such attempts.

Just as the speaker’s friend quotes Agee saying “All my people are larger bodies than mine”, so too is this poem larger than the sum of its own parts for what it is after is nothing less than to communicate something that lies outside of itself, and yet is at the heart of human experience, which is the mind’s capacity to make a leap towards meaning which gives life its dignity and triumph.

Likewise, Nick Thran approaches the same questions of meaning and poetic attention in his poem “Earworm”, the title of his most recent poetry collection, but he appears more hesitant to bestow any lasting significance to his words in case they distract him from what he seeks which is to describe the great leap forward itself, the precise moment, when out of the imagination’s din, images are born into language.

So there’s likely a more accurate name
for the glow of a deer’s eyes in the dark.
For the hunger that drew a python in Florida
to swallow an alligator whole. For the aura,
the swell just before the gut burst.
For why you’ve been staying up late at night
on a search engine, looking for all of the possible
names for a lump at the back of your nostril.
For the name of that girl who sold you a pill
from the basket of her bike, and rode off while
her fairy wings flapped in the breeze. And a name
for that breeze. Repetune, ohrworm,
the last song stuck in your head
which became something else. And for what else?
For not being able to say the one thing
that might have kept you from continually falling apart.
For discovering late. For replaying the video clip
of Joltin’ Joe Carter’s ninth inning blast
in the ’93 series. For the sound when the ball
hit the bat, and everyone knew they’d won
before it left the park. And for the white noise
that isn’t white noise, but a poor translation of what
the blood tries to say. And what the blood tries to say.
For the feeling of never wanting to leave the party
and then having to leave. For the ache in your legs
when you should have cabbed home, but decided to walk
and the walk was too far. But you had to keep on—
Earworm, Little One, chugging along, traveling towards a name.

The nagging tune stuck in the head of Thran’s speaker is the sibilant voice of the mind, the white noise of thought and image and imagination venting through the bedrock of human awareness, trying to explain why things are and why we do the things we do.

Unlike in Rader’s poem which is a kind of monument to life’s fragility and to the redemptive qualities of poetry to make life meaningful through its retelling, Thran’s speaker is more ironic in his attempts to formulate meaning for he knows he must use words which are for him, “a poor translation of what / the blood tries to say”.

If there is a common denominator in Thran and Rader’s poems, it is how they both seek to enact what Dave Smith has called, “the deep reverberations of living” (253). The seriousness with which both poets go about this task is shown not simply through the sundry tools of wordsmithing, but through faithful attention to thought and image, giving each poem its active sense of a mind feeling and thinking in time. If you have enjoyed these poems, please pick up copies of Matt Rader’s A Doctor Pedalled Her Bicycle Over The River Arno and Nick Thran’s Earworm at your local bookstore.
Posted by Chris Banks at 7:51 AM No comments: