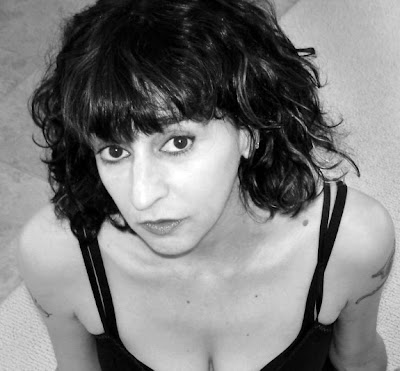 Kim Addonizio writes in one chapter called “Describe This” from her book Ordinary Genius: A Guide for the Poet Within that, “Description is important because it’s evidence. One meaning of evidence is ‘outward sign.’ In a trial, physical objects may be entered as evidence, as proof. To follow through on ‘I can’ is to say: This happened. There is an Irish proverb: ’The most beautiful music of all is the music of what happens.’

I have been reading Addonizio’s poetry for a number of years and surely one of the things I love about it is her technical mastery of description. Bold, street-savvy and molto sexy, her writing is exhibitionistic and fearless in a way that other writing only tries to be, and underneath it all, her impeccable tailoring skills shine through as if every loose thread were cut away with a straight razor. For example, look at what she does with one of the most Xeroxed of poetic images, the human heart, in this poem from her most recent book Lucifer at the Starlite published by Norton:

That Mississippi chicken shack.
That initial-scarred tabletop,
that tiny little dance floor to the left of the band.
That kiosk at the mall selling caramels and kitsch.
That tollbooth with its white-plastic-gloved worker
handing you your change.
That phone booth with the receiver ripped out.
That dressing room in the fetish boutique,
those curtains and mirrors.
That funhouse, that horror, that soundtrack of screams.
That putti-filled heaven raining gilt from the ceiling.
That haven for truckers, that bottomless cup.
That biome. That wilderness preserve.
That landing strip with no runway lights
where you are aiming your plane,
imagining a voice in the tower,
imagining a tower.

Delight, experience, and isolation are communicated so expertly in the first three lines of this poem that the reader forgets momentarily that this is a poem about the human heart – that throne-room of human longing and self delusion - a cliche poets have been snivelling about since they first put pen to paper. But here Addonizio makes the image new again which is no small feat. I especially love how she communicates hope, desperation, vulnerability and trust in the last few lines, “That landing strip with no runway lights / where you are aiming your plane, / imagining a voice in the tower, / imagining a tower.”

The way Addonizio employs description in this poem is very much the same idea Mark Doty articulates in his book The Art of Description when he says,

“What we want when we describe is surely complex: To solve the problem of speechlessness, which is a state without agency, so that we feel impressed upon by things but unable to push back at them? To refuse silence, so that experience will not go unspoken? To be accurate (but to what? the look of things, the feel of being here? to the strange fact of being in the face of death?)? To arrive at exactitude in order to experience the satisfaction of matching words to the world, in order to give those words to someone else, or even to just savor them for ourselves?” (9)

The best descriptions in poetry are always savory, but Addonizio seems to hold firmly to the belief that they must also be audacious and adventuresome, shaking up those ideas or objects they are attempting to explain, or translate, with a little razzle-dazzle. In her title poem “Lucifer at the Starlite”, Addonizio takes on the decline of western civilization and late-stage capitalism post-Enron and 9/11 by making the hero of her poem, Lucifer, just another splashy irresponsible corporate leader addicted to greed at the expense of the impoverished and the environment:

Lucifer at the Starlite
--after George Meredith

Here’s my bright idea for life on earth:
better management. The CEO
has lost touch with the details. I’m worth
as much, but I care; I come down here, I show
my face, I’m a real regular. A toast:
To our boys and girls in the war, grinding
through sand, to everybody here, our host
who’s mostly mist, like methane rising
from retreating ice shelves. Put me in command.
For every town, we’ll have a marching band.
For each thoroughbred, a comfortable stable;
for each worker, a place beneath the table.
For every forward step a stumbling.
A shadow over every starlit thing.

Besides being a beautifully conceived sonnet (and a clever allusion to this old chestnut), this poem describes the essence of what has happened in the last ten years to America. It offers itself up as proof of the chaotic collapse of financial institutions, the global war on terrorism, and the growing disparity between rich and poor. In Addonizio’s world, that rough beast slouching towards Bethelehem is nothing more than Citigroup or perhaps Rupert Murdoch. This is a poem “not of direct statement but of direct evocation” to paraphrase something Denise Levertov once said.

Description demands poets take the limits of our language and bend them until they take on, not so much the exact colour and shape of our shared world, but the revelation of it. Kim Addonizio’s own pleasure in describing that world is obvious in Lucifer at the Starlite.
Posted by Chris Banks at 7:50 AM