Falling in Love with Poetry: A Bird’s-eye View 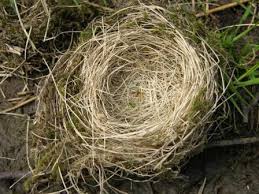 (The essay below is one I wrote for the Summer/Fall edition of The New Quarterly (number 91) in 2004 as part of their "Falling in Love with Poetry" essay series. I was going through my bookcases and came across my copy of The New Quarterly and thought it was high time to revisit this essay. Enjoy!)


As I sit at my desk writing about poetry, that befuddling word which contains so much territory—so many untranslatable thoughts, ideas, and emotions which I still don’t have any proper definition of—I look out my window at a couple of small birds. They are swooping in and out of a metal grate, up near the roof, on the side of my neighbour’s house. They are feeding their young, whom I cannot see, but I do hear, as they chatter incessantly, from morning until night. The parents are swooping in and out of the grate, attending to the hungry mouths within, but when they are not feeding their babies, they are sitting on the side-mirror of my car, staring up at the grate. This strikes me as a particular satisfying metaphor for a discussion of poetry: for poetry is the world you see and the world you don’t, the one that is visible and the one, although hidden, which calls out to you.

I write upstairs in my one and a half-storey brick house, mostly on computer, but I do carry a notebook with me, mainly to record titles and ideas for poems, or the blessed few stray lines which come to me fully formed and intact. I write mainly in the morning, tinkering with words anywhere for two to five hours a day, depending on how well a poem is working, or how obsessed I am with the idea of finishing a particular piece. As I am a teacher by profession, I write on weekends during the school year and nearly everyday of my summer holidays. I don’t get much writing accomplished during the school year because teenagers, on the whole, are what I would term “energy vampires”. This is an irrefutable fact. Any high-school teacher will tell you so. I do, however, write extensively over the summer months because they offer two things to my mind that I feel are essential to any poet: time to think and, perhaps more importantly, time to read.

Like many, I began writing poetry in high school at a time when I had already moved several times across Ontario and I was feeling, as many teenagers do, rather jaded, disconnected and out of sorts. My family was living in Stayner, and my growing sense of myself was deeply at odds with my rural surroundings, which consisted mainly of hockey booster club punch-ups, country and western truck dances, and marathon bush parties. But it was there in a high-school classroom where I was first introduced to poetry by the way of an NFB film on the Canadian poet Earle Birney. My first impression of Birney was that he was rather old, and I honestly don’t recall paying too much attention to what he was saying, until he started to read. It was the reading that caught my interest. It was this voice that came from him, and from beyond him, what the Mexican poet Octavio Paz has coined the other voice. Whatever its name, there was something about the quality of Birney’s voice, as much as the content of his poems, that strongly resonated with me as a teenager. I began to seek out other Canadian poets; specifically those few poets I found in my tiny high school library, poets like Layton, Cohen, and Atwood, and not surprisingly, I was soon writing my own poems.

Later I moved to Guelph, where I wrote a great number of bad poems and read them rabbit-scared at open mike nights on campus. After a few years of scribbling poems furiously, I moved to Montreal to do a Master’s degree at Concordia University. There I ran smack dab into the red pen of Gary Geddes who taught me a great deal about the study of poetry, and my own limitations as a poet. My poems were still not very good but they were getting better. Knowing my poems were still not very good, however, was a hard sobering lesson, one I imagine all young poets have to face up to eventually, if they are to get better. For me, at that time, I could hear what all poets hear—that dark personal music percolating up from within, what the poet Dennis Lee has called cadence or “the living flux that poems rise out of” (31)—but somehow I could not transmute it into words, or at least, the right words yet.

What’s changed the most for me in these past twenty years is my overall dedication to the writing of poetry. I read more widely and more carefully. If my skills have grown, it is because I have become more intuitive and patient over the years. I certainly have a stronger sense of craft, of what craft is, but I also write more honestly about my life. If I had to characterize my own writing, I would say I write predominantly in three distinct veins: the personal lyric, the narrative, and the meditational modes. Simply put, I write lyric poems to express complex emotional situations; narrative poems to explore an idea, or a feeling (spinning a good yarn while I’m at it, I hope); and meditational poems to ask hard questions of my surroundings. But all of my poetry, in one form or another, is really just an attempt by me to come to a closer understanding of my life—to hear, in my own words, that other voice I first heard back in a high school classroom years ago.

Octavio Paz said, “Poetry sings of what is happening; its function is to give form to everyday life and make it visible. I do not claim that this is its only mission, although it is the oldest, most permanent, and most universal one” (133). Other poets may write for other reasons, but this is certainly why I write poetry. So let me perhaps leave off with the few words of advice that I have gleaned over the course of two decades of writing, and rewriting poetry. Reading a wide swath of poets and poetry is essential to becoming a better poet, as is a knowledge of formal technique, but I won’t say it is everything. A poem should not just be a ransacking of words. A good poem, if it is a good poem, may use assonance, alliteration, and internal rhyme in considerable ways, yet these are only the joists propping up a poem’s deeper emotional or ideological centre. Where exactly this centre lies is often unknown, or at least shifting, which leads me back to those little chattering birds outside my window.

As a poet, I am constantly trying to articulate what lies just outside on the periphery of vision; to put into words the world I see and the one I hear—that place where the other voice resides. And perhaps it is this seeking, as much as any amount of reading, or study of craft, that has taught me the most of what I know of poetry today. As Paz states: “All poets in the moments, long or short, of poetry, if they are really poets, hear the other voice. It is their own, someone else’s, no one else’s, no one’s, everyone’s. Nothing distinguishes a poet from other men and women but those moments—rare yet frequent—in which, being themselves, they are the other” (151).