The Only Picture of Hernandez, New Mexico
in the Smithsonian Institute

A man and his son driving on Highway 84, a two lane black-top
thirty miles from Sante Fe, pull over onto the shoulder, noticing
the moon’s face poised over the snow-capped Truchas mountains;

the darkness falling over the tree-lined banks of the Rio Chama
flowing down to meet the Rio Grande, the smell of sage, burning
pinion, its woodsy fragrance, rising from the chimneys of houses

in a village sitting beside a church, a graveyard full of white crosses.
He sets up his tripod on the roof of his car, the light failing him
so he must work quickly, fumbling with lens filters, film holders,

all the variables and unknowns, estimating the moon’s luminosity,
exposure times, shutter speeds, while shadows consume the daylight
where the adobe church, a monument, stands illuminated at dusk

glowing from within. The white crosses flush, no longer ornaments
but part of the spirit’s nomenclature. Heaven and Earth conjoin
at the back of the man’s retina, a cloudbank hovering magisterially

as he snaps the photograph trying to pull back the shutter again,
but the light changes, the impetus fades, and the world is suddenly
only the world again. Weeks later, he improvises in his darkroom

half-tones of feeling, dodging and burning in areas, making the sky
endlessly dark, the sagebrush a mural of silver, the village empty
as in a child’s dream. He uses sleight of hand to extract a confession

from the land, teasing out light and darkness, so it speaks quietly,
poignantly, like a revelation. Nothing is forever but looking deeply
at the world, as it was made over fifty years ago, through a lens

ministers to man’s hope for redemption although none is coming,
for the man who took this picture has gone into those mountains
so completely he has become them. Who knows if a town existed,

or if anyone had ever lived there, until in the darkness of his room
he placed the moon to look over it, light moving through the crosses,
making us believe, if for a time, it is possible to outlast the night. 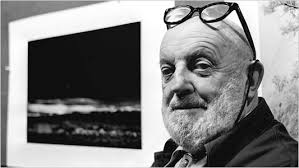