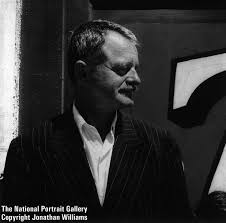 I have been thinking about the San Francisco poet Kenneth RexRoth who so eloquently, poem after poem, collection after collection, was able to trace the connecting lines between psyche and kosmos which he saw as fundamental to human experience.

In an essay called “Poetry and The Self: Reflections on The Discovery of the Self in Early Greek Lyrics”, Renate Woods talks about how Heracleitus from his study of Greek lyric poets, began “to see the intensely felt as more compelling than external appearance and to discover the soul as an inner realm with its own dynamics” (105).

This is an idea that put me in the mind of Kenneth RexRoth whose own strongly held beliefs placed the apprehension of reality, through the twin condensing lenses of poetry and love, as being key to his own evolving consciousness and spiritual awakening.

A perfect example would be his poem “Growing” which is about the strong feelings of self-realization and enlightenment that stem from the pure act of loving someone else, but it is also about the necessities of contemplation and shared love between two people in a century that was for Rexroth marked by unprecedented human violence. I include the poem in its entirety below:

Who are you? Who am I? Haunted
By the dead, by the dead and the past and the
Falling inertia of unreal, dead
Men and things. Haunted by the threat
Of the impersonal, that which
Never will admit the person,
The closed world of things. Who are
You? Coming up out of the
Mineral earth, one pale leaf
Unlike any other unfolding,
And then another, strange, new
Utterly different, nothing
I ever expected, growing
Up out of my warm heart’s blood.
All new, all strange, all different.
Your own leaf pattern, your own
Flower and fruit, but fed from
One root, the root of our fused flesh.
I and thou, from the one to
The dual, from the dual
To the other, the wonderful,
Unending, unfathomable
Process of becoming each
Our selves for the other.

This poem begins in an unlikely way for a love poem as it seems to ask how do you allow yourself to be vulnerable, the very thing so necessary if you are to love another or to contemplate the meaning of one’s life, when the specter of death haunts you? Rexroth, a conscientious objector during World War II, wrote this poem when he felt, as so many other writers and artists did at the time, caught between two devastating world wars and the ever growing tensions of a cold war which might possibly produce a third. That cultural paranoia finds release in the lines: “Haunted / By the dead, by the dead and the past and the / Falling inertia of unreal, dead / Men and things.”

The remedy for such cultural and historical despair it appears for RexRoth was love and deep contemplation of one’s surroundings. It is this discovery that creates a powerful sense of hope rescuing the poet from the meaninglessness of existence, or “the threat / Of the impersonal”, and admits him into “the closed world of things”.

Donald K. Gutierrez has already mentioned about another one of RexRoth’s poems (Time Is the Mercy of Eternity), “that one crosses the traditional and arbitrary line between subject (the "I") and object (the "it," Other, World) and, becoming part of one’s surroundings, transcends their and one’s own partialness towards an exalted clarity”.

All new, all strange, all different.
Your own leaf pattern, your own
Flower and fruit, but fed from
One root, the root of our fused flesh.

It is the immediacy of sexual love that proves, at least for RexRoth, the underlying connection of all things which culminates in the final lines of the poem:


I and thou, from the one to
The dual, from the dual
To the other, the wonderful,
Unending, unfathomable
Process of becoming each
Our selves for the other.

From the I to the dual to the other, hope springs eternal. In his foreword to The Complete Poems of Kenneth Rexroth published by Copper Canyon Press, Sam Hamill states RexRoth believed “that love is the sacramental expression of hope and responsibility”. This is what ultimately saves the world from the “Falling inertia of unreal, dead / Men and things” allowing an individual to grow.
Posted by Chris Banks at 4:24 PM