Well, I have spent the last couple of days printing broadsides in the basement and after solving a myriad of technical issues, I think they turned out quite nice. Printing on a Kelsey Excelsior is very labour intensive and quite a fitness workout—look for my new video “Rock Solid Abs Through Table-top Letterpress Printing“ (marketed towards late thirty-something middle-aging poets who are sagging around the middle) coming to a store near you! Anyways, these broadsides signal the completion of all my printing projects for the near future as it is time for me to get back to writing poems. On another note, Paul Vermeersch has conducted a little interview with me about being a novice printer over at Open Book Toronto. Enjoy the photos below! 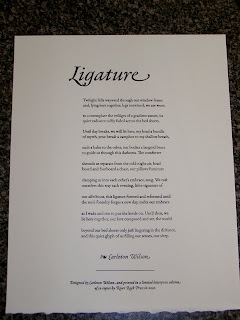 This is a broadside I did for Carleton Wilson who is the editor of both of my books and who published my first chapbook Form Letters under his Junction Books imprint so it was with great pleasure that I was able to return the favour. I cannot take any credit for the design of the broadside as Carleton is a graphic designer by trade and the poem itself is about typography amongst other things so it was natural that he also do the design. For whatever reason, this poem was difficult to print all at once so I ended up having to cut up the plate and print it in separate runs. The typeface is Garamond PremrPro printed 8½x11 on Canson Edition paper and limited to an edition of 50 copies. 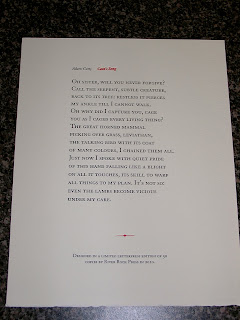 This is a broadside of Adam Getty's poem "Cain's Song" which appeared in his poetry collection Repose by Junction Books, and imprint of Nightwood Editions. Adam is one of my closest friends and I value his opinions on all things poetry. I found myself deep in the weeds with this one and really struggled which might have been the type-face I chose as some digital type-faces do not lend themselves to photopolymer printing as well as others, but also the rollers would not meet the areas of the plate I wanted to ink in red without lots of extra fiddling with the taping on my rails. For whatever reason, the printing gods were not smiling on me. The typeface is Granjon-SC on Canson Edition paper and limited to an edition of 50 copies. 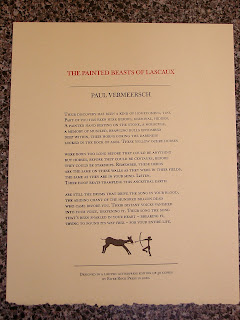 This is a broadside of a poem I did for my best friend Paul Vermeersch which will appear in his upcoming fourth collection of poems The Reinvention of the Human Hand out with M&S this Spring. This was the easiest time I've had with a printing project thus far which I'm thinking had to do with the paper I used which was Rives - it prints like butter! I had only a slight problem with getting the title to align properly with the rest of the poem but my wife Teresa came to the rescue. I had to do three seperate runs with this one which took about five hours. The typeface is BaskervilleOldFacSCD printed on Rives paper and limited to an edition of 50 copies.
Posted by Chris Banks at 7:59 AM 2 comments:

Paying Homage to the Pantheon: A.F. Moritz’s “The Straggler”

Poets do not invent themselves out of whole cloth; they are students of poetic composition who toil away, night and day, at their craft for many years. For the truly dedicated ones, this will last a lifetime. “Eternal apprenticeship is the life of the true poet,” as Theodore Roethke once remarked and it is a particularly pithy observation for introducing A.F. Moritz.

Both apprentice and teacher, it is hard to pinpoint what exactly characterizes his poetic style for that style has changed so often over the course of seventeen books. His tone is both complicated and passionate, his images both allusive and emblematic, his pacing both discursive and disciplined.

To read Moritz is to read many things— the surreal, the philosophical, the classical. Indeed, there is always a lot of English lurking behind his English which gives his poems their sense of high seriousness and unmistakable authority. Take, for instance, his poem “The Straggler” from his book Night Street Repairs published by Anansi press. This is a poem I find myself going back to all the time because of its pantheistic respect for poetry’s precursors:


It was when they all had vanished in the valley
of individual velleity that he lost them.
It was when he trailed them from an eager distance,
observing from rock ledges or high grass.
It was later when he saw them casting pots
a little differently each in the manufactory.
It was when they sang their massive denial subtly.
It was when he heard each celebrate one thumbprint
baked in the innocent clay. It was when he smelt them
cataloguing infinite many hues of umber.
It was when he felt the horn of the mighty hunter
faint in trembling coverts blossoming endlessly.
It was when a sudden edge cut the sobbing leaves,
when the vessels all were smithered by a hammer
and there were Blake and Homer, that he found them.

The spiritual undertaking in this poem—the squandering of individual possibilities; the desire for atonement and redemption through art—puts me in the mind of the prodigal son, albeit this is a non-Christian myth substituting poetry's fore-fathers for religion. The poem begins with the lines “It was when they all had vanished in the valley / of individual velleity that he lost them” suggesting that the reckless disregard of an individual’s freedom to make one’s own choices in life, to suppress and not act upon one’s personal desires, is a waste, even a sin, for it leads to solitude; an over-hanging sense of spiritual desolation that leaves one in the wilderness.

Atonement, it seems, comes through the making of art as Moritz writes, “It was later when he saw them casting pots / a little differently in the manufactory. It was later when they sang their massive denial subtly. / It was when he heard each celebrate one thumbprint / baked in the innocent clay.” How I read these lines is that poetry is about individual making—indeed, the word comes from the greek word poesis or ‘to make’—thus the “casting pots each a little differently” and the celebration of one’s “thumbprint baked in the innocent clay”. The line “they sang their massive denial subtly” appears more gnomic and lends itself to a few possible interpretations. The massive denial might be the choice not to cast pots or to make art as ‘imitation’ which is what you would find in a manufactory, but also it might be read as the refusal to subordinate one's artistic production to the demands of larger society.

The poem swerves again with the introduction of “the horn of the mighty hunter” which is both the clarion call of our own mortality, Death hot on the heels of the incipient poet, but also the powerful voice of the Imagination “blossoming endlessly” once it is heard.

Lastly, redemption comes when “the vessels were all smithered by a hammer" suggesting all one’s models for poetic composition must be done away with, at some point, if one is to write one’s own poetry and be counted among the pantheon of poets, not crushed beneath it.

As Wallace Stevens said," After one has abandoned a belief in god, poetry is that essence which takes its place as life's redemption" and certainly I take this to be the theme of Moritz's poem. If you found yourself enjoying A.F. Moritz’s poem “The Straggler” as much as I do, please pick up Night Street Repairs or his more recent Griffin award-winning collection The Sentinel, both by Anansi press.
Posted by Chris Banks at 7:17 AM 1 comment:

“This is not a poem,” the smart dressed man with the slide rule said
as we walked across a field full of gold bees nosily excavating pollen
from the bursting flowers. Clouds were casting long shadows over
distant hills. “I assure you this is a poem,” I said, plucking a blade
of grass and watching the brittle light eat away at its green interior.
“That is nonsense,” the young man said. His brow weighed down
by too much knowledge, and not enough pure intention. “This is
a sentence,” he said, “Where is the line?” “The line is here,” I said.
“It is just a different kind of line.” At that moment, birds began to
sing and the two of us began to meditate on some deep remembered
past, bird-songs rising, and falling, and circling back to the hidden
sources we draw our lives from. “There is no such thing as a prose
lyric” the middle-aging young man said, measuring with his slide rule
a nearby branch to see if he could calculate, in syllables, its corporeal
existence. “Poetry is abundance,” I told him. “Listen to the river and
the birds and the wind. In that plenitude, that fullness, even Time
is suspended.” “There is no river, no birds, no wind, and no trees,”
the man said, touching his fingers to the scarred bark of a large tree.
“That is partly true,” I said,“These are only innuendoes”. Mistakenly
he thought I was making fun of him, and not to be outdone, the man
stomped the ground and said, “All is prosody”. “All is paraphrase”, I
calmly reminded him. “But there are no line breaks,” he said. “But
there are line continuums” I repeated. Finally, becoming a little testy
he stammered, “Nothing is happening here!” “Ah, but poetry makes
nothing happen,” I said quoting Auden back to him which is when
he grew silent, started to mutter to himself, and taking his slide rule
in hand, fell to the ground and began to measure each blade of grass.

From My Top Shelf 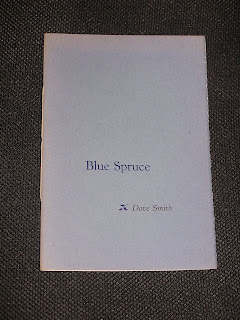 Here is another favorite prized book from my collection. This one is a small chapbook by the American poet Dave Smith who writes some of the most rigorous and imaginative narrative poetry I have ever encountered. His poetry is ruefully meditative, at times, while in other instances, tenderly poignant, and able to integrate one man’s unblinking poetic conviction to witness life as it is lived with a capacious sense of the American Southern conciousness.

His poetry is distinctly American and I envy him for it as we Canadian poets are still engaged in that wonderful enervating argument about what constitutes good poetry in this country.

I love this chapbook for Smith’s poetry, of course, but also the time and care that went into its production. I wonder why more Canadian presses are not producing such lovely little books as objects of art. The answer I’m afraid probably has something to do with cultural despair and the mistaken belief that the poetry buying public’s appetite for such beautiful little chapbooks has atrophied. Poetry books have become more shiny, more glossy, and, ultimately, more disposable which is a shame. 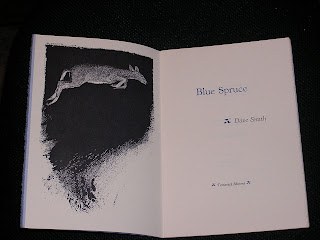 This chapbook is a first edition in hand-sewn wrappers with illustrations by Barry Moser. 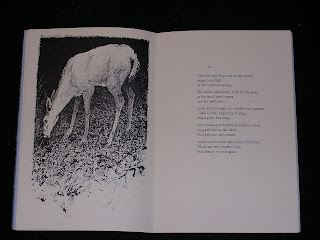 It was published in 1981 by Tamarack Editions and limited to an edition of 300 copies. Another 36 copies were bound in cloth.
Posted by Chris Banks at 4:41 PM No comments: